"Girls, express yourself via code!" 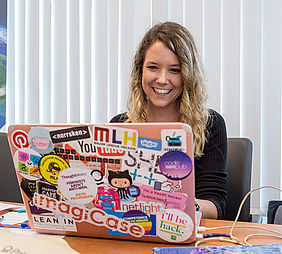 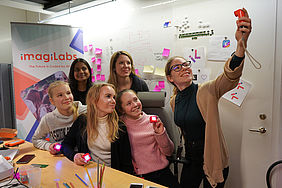 "There is no reason to limit ourselves. The lack of woman in tech is a global issue."

Before even launching her first product, in May 2019, the co-founder and CEO of imagiLabs has already been getting a lot of attention: livestream broadcasts, media interviews, winning pitching competitions and even making the Nordic 100 list of the region's most influential tech personalities and being incubated in Sting, a Stockholm based incubator in Sweden as of February 2019. What makes Dora Palfi, EIT Digital Master School student, and the startup she founded so popular? "Having a purpose makes the difference".

Stimulating woman to get into technology is Palfi's purpose, driven by her desire for equality. "Technology, especially digital technology, is shaping the future. Half of the population is female, yet women today are underrepresented in tech. They do not have an equal chance to shape the future, to contribute to where the world is going to. We need a diverse population in technology to build a better future."

This aspiration to increase the representation of women in technology has grown over the years. It started in a very practical way during Palfi's bachelor studies in neuro- and computer science at NYU Abu Dhabinear Dubai where she set up the interest group weSTEM. "Women lack role models in this field." Later, at the EIT Digital Master School, she co-founded  the EIT Digital Alumni's Women@EIT initiative for the same reason. "We want to disrupt the stereotypical idea that technology is a man's business by supporting female speakers and entrepreneurs in the tech scene. Therefore, all Woman@EIT events are also open to men."

In  2016, during her first year of her EIT Digital Master School programme Human Computer Interaction &Design at the KTH in Sweden, her entrepreneurial drive was kindled when she discovered she could actually act upon her heartfelt purpose. "Before this school, I had no plan to start a company. As an engineer, it is hard to grasp the practicalities of entrepreneurship. Thanks to the entrepreneurship classes, I found the courage to think that maybe I could do something with my passion. In my studies, I learned how that could work."

An idea is born

That insight came during a research project at the EIT Digital Master school. Knowing that there is a lack of woman studying technology, only 17 percent of engineering students are female she says, Palfi began to think about how to go about changing the ratio of woman in tech. Palfi found in research from among others Google & Gallup that boys and girls have a similar interest in technology up until the age of twelve. After that, girls tend to lose their interest. What does interest girls are three things: self-expression, being part of a community and the love for smartphones. With this in mind, she built a clay and paper prototype of a telephone case for teenage girls.

Palfi took a gap year from school to investigate more deeply the market potential. She got accepted for the S-factory at Start-Up Chile. Here she built the first 3D printed version of the telephone case. "We did workshops and testing and validated that this is exciting for girls. Self-expression and being able to customize is important to girls. We learned: teaching girls how to code gives them confidence and coding can be a tool for girls to express themselves."

In 2017, she received a research grant fromthe Schwarzkopf Foundation to do further research in Europe. "I spent the month of November 2017 traveling in Europe and conducting interviews with women in tech." This resulted in an even clearer picture of the lack of women in tech in Europe which Palfi communicated in an infographic. Plus, it gave her the confidence that she had enough grounds to start a business. This she did in late summer 2018 together with Beatrice Ionascu, whom she had met at NYU Abu Dhabi.

The co-founders started to walk their talk by showcasing themselves as CEO and CTO of imagiLabs, becoming role models themselves. They updated the prototype to a working, innovative model called imageCase: a phonecase with embedded LED lights that users, girls between 12-18 years old, can programme themselves via a mobile app on their smartphone to display any text, design or colour of their choosing. "The Tekla festival was our first customer who ordered thirty units. We used these at a workshop we arranged here to test and validate the product." In total, the co-founders had been working in total with about 200 targeted end users.

Then things moved fast. In October 2018, imagiLabs won the University Startup World Cup from the Danish non-profit organisation Venture Cup Denmark, gaining five thousand euros to invest in the business. And, to the co-founders surprise, they discovered while at the annual Slush conference in Finland that they both had been named in the Nordic 100 of the 100 most impactful people and startups in the Nordic countries, which is announced at Slush. "We were very humbled. There are a lot of powerful people on the list."

In winter 2018,  imagiLabs was also nominated for the EIT Woman Award at the annual EIT Awards and was a finalist in the European Social Innovation Competition, an initiative of the European Commission. During the same period, both co-founders have been interviewed by various media. In fact, on the day of this interview Palfi appeared on the wrlds.com TV Show.

Winning so many prizes and awards even before the startup launched its first product was mainly due to networking, says Palfi. "We have been extremely proactive. Networking is very important! We go out to tell our story where- and whenever we can. We took part in boot camps and pitching competitions. For example, our participation in the Ericsson Innovation Awards gave us a lot of exposure."

Although the imagiCase has been succesful in competitions, it has not been brought to market (yet). "We do not want to be a phone case company", explains Palfi. Instead, imagiLabs will launch a programmable keychain in May 2019. The keychain can be programmed via an app that also offers tutorials, games and exercises to teach coding. "Keychains are valuable accessories for teenagers. Girls can programme funny things on their digital buddy. It lowers the barrier to start coding and shows that it's fun."

imagiLabs is built on three pillars: the hardware, which provide a low-threshold entry point to coding, an app to actually programme their devices and an online community for girls. At the moment, imagiLabs has two fulltime employees, Palfi and Ianescu and six part time staff. That should change over time since the aim is to create various gadgets and tools for millions of teenage girls around the world and to manage a worldwide community of girls who in the long run can play a part in the envisioned big change in technology. "There is no reason to limit ourselves. The lack of woman in tech is a global issue."

As smooth as the launch of her company seems, success does not come overnight, Palfi explains. "There is a bit of hype around starting a company. It is hugely romanticised. In fact, it is way harder than you imagine. You have to be aware of and admit that you can be limited, in resources for example and in what you can achieve. And making decisions is hard. We have a clear why: to inspire teenage girls to fill the gap in the tech pipeline. Having a purpose and caring about it helps a lot."

Palfi's biggest learning so far, is that you never stop learning. "You keep pushing yourself. If you are passionate about what you are doing, then your limits expand, you get so much done then. It is exciting to start a company."