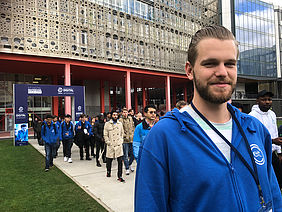 At the EIT Digital Master School Kick-Off, about 400 newly enrolled students came together in Paris to mark the start of the new European academic year. One of them was Gijs Wissing, who is already dreaming of launching one or more startups. He has a mission: he wants to make autonomous things sexier and show that they are not dangerous. Let's meet him.

Wissing visibly enjoyed the Kick-Off and the vibe that the students brought to it. "I really loved it. It was super intense, inspiring and choatic in a good way. It sure was tiring, but worth every missed minute of sleep. What impressed me most is how much stuff you can get done with a motivated group of people in a small amount of time. Especially given that the ideas and beliefs of people in a group are generally not aligned."

What did you learn in these three days?

"I experienced first-hand what value different backgrounds can bring to a brainstorming exercise such as the business challenge. On top of this, I learned a new dimension of leadership as I had to delegate work to others in a very time-constrained situation. I came in late to the business challenge but quickly manoeuvred myself into a case-owner role and became the designated pitcher of the group. Finally, I learned about all the opportunities EIT Digital offers, which you don't see on the surface but which are extremely valuable."

Wissing started his first year of the Autonomous Systems Programme, which is offered at six partner universities, at Aalto University in Finland this September. He has a place to study at the Eötvös Lorand University (ELTE) in Budapest for his specialisation year. "But I might want to switch my second year. I'm now considering EURECOM in Nice and the University of Trento most strongly because of their specialisations."

You did a Bachelor's in Aerospace Engineering at the Technical University in Delft. How did you come to EIT Digital?

"I was very interested in developing software and in computer science but my Bachelor's diploma in Aerospace Engineering does not qualify for most computer science masters. I went to an open day in Eindhoven University of Technology where I learned about the EIT Digital Masters School programme. I was intrigued and also attended a presentation about the EIT Digital Master School at Delft University of Technology. I heard about Autonomous Systems and realised it was a good match for my aerospace background. I immediately started the entry process by writing a motivation letter and got in!"

What attracted you to the Autonomous Systems programme?

"I was inspired by up-and-coming technologies like Artificial Intelligence (AI) and Machine Learning. I wanted a broad programme. I do not want to specialise in the aerospace industry; that is just one application. I want to become a generalist that can make all vehicles autonomous."

How is your study going so far?

"So far, it has been amazing. I've experienced a big increase in my tempo of study. That is both shocking and familiar. During my bachelor's, I was a student; still a kid who was just adapting to being away from his parents. Sometimes reality hit hard when the exam period arrived. Last year, I worked in the IoT industry. I had just two courses left in my bachelor's and worked full time in a smart building company as a Python developer. I now feel studying at EIT Digital Master School is a mix between academic and practical work. That is very welcome to me. In Aalto I am always busy doing assignments. I never have downtime. This makes it much easier to stay involved and be productive all the time."

What do you mean? How do you stay involved?

"I really like the way the EIT Digital Master School in Aalto integrates with startups and industry. It creates a pleasant atmosphere to study in a working environment. I always work at the Co-Location Centre of EIT Digital in Espoo. I like to study here; I come here before and after lectures to study. There is always a buzz going on."

Why did you choose Aalto?

"I liked the idea of going to a Nordic country. I had never been in Finland before and, of course, Aalto is one of the universities that offers this programme."

"Living here feels very vibrant. Being a student in Finland, drives you to become a founder of a startup; it feels like there is a small bridge to cross. That is good. There are a lot of student communities and organisations that try to promote startups and there is an entrepreneurial spirit. When you come into contact with it this much, you start to feel the spirit yourself. I'm already thinking about starting a company during my studies. I want to find out how that would work. I do not have a vision yet of what or how. I like working in this environment, and I love to work in a small team. I'd like to see if I can succeed. But also, I'd like to have the chance to fail, so I can learn."

What is your dream for the future?